The King of kings 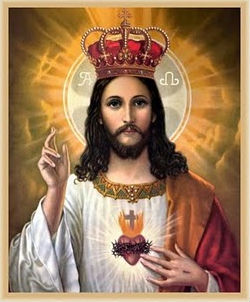 Jesus Christ existed before time (John 1:1-5). In the beginning of the universe Christ was there. In fact He created the universe. He established physical laws, dimensions, matter, anti-matter, time. He is God. The Holy Trinity exists as three persons: the Father, the Son(Jesus Christ), and the Holy Spirit. The Father gave birth to Christ before the beginning of the universe and before time. The Son, Jesus Christ, is God of one essence with the Father. He is all-powerful, omnipotent, ruler of everything, emperor of the world.

Christ performs miracles. When on earth He healed the sick, He raised from the dead, people like his friend Lazarus who had been dead four days (John 11:1-44). Even in our days there are people who by calling his name perform miracles.

The Prophet and King David recognized Him as His Lord in psalm 110 (Old Testament) : "The Lord said to my Lord." Here two Lords are mentioned, one is the Father and the other is the Son. In the same psalm it is said that the Lord (Father) will give to Christ the rod of iron which means authority over everything and that the Lord will execute kings in the day of His anger. Also in the Old Testament in the book of Zechariah 6:12-13 the prophet says: Then speak to him, saying, ‘Thus says the Lord of hosts, saying: “Behold, the Man whose name is the BRANCH! From His place He shall branch out, And He shall build the temple of the Lord; Yes, He shall build the temple of the Lord. He shall bear the glory, And shall sit and rule on His throne; So He shall be a priest on His throne, And the counsel of peace shall be between them both”’. Furthermore, in Zechariah 9:9 it says: Rejoice greatly, Daughter Zion! Shout, Daughter Jerusalem! See, your king comes to you, righteous and victorious, lowly and riding on a donkey, on a colt, the foal of a donkey (John 12:12-16). In Jeremiah 23:5: “The days are coming,” declares the Lord, “when I will raise up for David a righteous Branch, a King who will reign wisely and do what is just and right in the land". In Micah 5:2: “But you, Bethlehem Ephrathah, though you are small among the clans of Judah, out of you will come for me one who will be ruler over Israel, whose origins are from of old, from ancient times.” In Matthew 2:1-2: After Jesus was born in Bethlehem in Judea, during the time of King Herod, Magi from the east came to Jerusalem and asked, “Where is the one who has been born king of the Jews? We saw his star when it rose and have come to worship him.” In Matthew 28:18: Then Jesus came to them and said, “All authority in heaven and on earth has been given to me." In addition, in Luke 1:30-33 it is mentioned: But the angel said to her, “Do not be afraid, Mary; you have found favor with God. You will conceive and give birth to a son, and you are to call him Jesus. He will be great and will be called the Son of the Most High. The Lord God will give him the throne of his father David, and he will reign over Jacob’s descendants forever; his kingdom will never end".

Christ will come again on earth but not like the first time. He will come with glory, He will be surrounded by angels. He will shine. It will be like a great lightning. The dead will rise. Christ will judge the living and the dead and His kingdom will have no end. Jesus said Matthew 25:31-34: "When the Son of Man comes in His glory, and all the holy angels with Him, then He will sit on the throne of His glory. All the nations will be gathered before Him, and He will separate them one from another, as a shepherd divides his sheep from the goats. And He will set the sheep on His right hand, but the goats on the left. Then the King will say to those on His right hand, "Come, you blessed of My Father, inherit the kingdom prepared for you from the foundation of the world."" At the second coming of Christ the heaven and earth will be renewed, freed from corruption, purified, transfigured, glorified. Christ will fully dwell with His people. As Saint Paul says in his first letter to 1 Timothy 6:14-15: "Keep this commandment without spot, blameless until our Lord Jesus Christ's appearing, which He will manifest in His own time, He who is the blessed and only Sovereign, the King of kings and Lord of Lords."

Revelation(the last book of the Holy Bible) says a lot about Jesus Christ as King of kings. Relevant abstracts of Revelation are written below. Please, note that the Lamb in Revelation is Jesus Christ. John the Baptist calls Jesus the Lamb, in John 1:29: The next day John saw Jesus coming toward him and said "Look, the Lamb of God, who takes away the sin of the world!" Revelation 1:5: and from Jesus Christ, who is the faithful witness, the firstborn from the dead, and the ruler of the kings of the earth. To him who loves us and has freed us from our sins by his blood, Revelation 1:7-8: “Look, He(Jesus) is coming with the clouds,” and “every eye will see Him, even those who pierced Him”; and all peoples on earth “will mourn because of Him.” So shall it be! Amen. “I am the Alpha and the Omega,” says the Lord God, “who is, and who was, and who is to come, the Almighty.” Revelation 5:5: Then one of the elders said to me, “Do not weep! See, the Lion of the tribe of Judah, the Root of David, has triumphed. He is able to open the scroll and its seven seals.” Revelation 5:12: In a loud voice they were saying: “Worthy is the Lamb, who was slain, to receive power and wealth and wisdom and strength and honor and glory and praise!” Revelation 7:17: For the Lamb at the center of the throne will be their shepherd; ‘He will lead them to springs of living water.’ ‘And God will wipe away every tear from their eyes.’ Revelation 17:12-14: “The ten horns you saw are ten kings who have not yet received a kingdom, but who for one hour will receive authority as kings along with the beast. They have one purpose and will give their power and authority to the beast. They will wage war against the Lamb, but the Lamb will triumph over them because he is Lord of lords and King of kings—and with him will be his called, chosen and faithful followers.” Revelation 20:4: I saw thrones on which were seated those who had been given authority to judge. And I saw the souls of those who had been beheaded because of their testimony about Jesus and because of the word of God. They had not worshiped the beast or its image and had not received its mark on their foreheads or their hands. They came to life and reigned with Christ a thousand years. Revelation 21:5-8: He(Jesus) who was seated on the throne said, “I am making everything new!” Then He said, “Write this down, for these words are trustworthy and true.” He said to me: “It is done. I am the Alpha and the Omega, the Beginning and the End. To the thirsty I will give water without cost from the spring of the water of life. Those who are victorious will inherit all this, and I will be their God and they will be my children. But the cowardly, the unbelieving, the vile, the murderers, the sexually immoral, those who practice magic arts, the idolaters and all liars—they will be consigned to the fiery lake of burning sulfur. This is the second death.” Revelation 22:3-5: No longer will there be any curse. The throne of God and of the Lamb will be in the city, and his servants will serve him. They will see his face, and his name will be on their foreheads. There will be no more night. They will not need the light of a lamp or the light of the sun, for the Lord God will give them light. And they will reign for ever and ever.