The mother of God 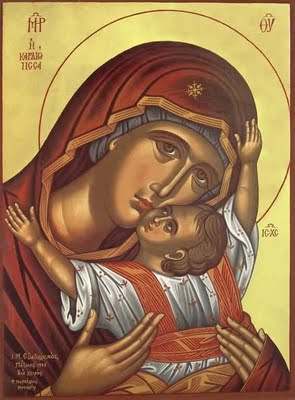 The mother of God is superior to any human and to any angel. In hierarchy she is at the top, no other creature who lived, is living and will live can surpass her. She is immediately below God, she is not God. She is beyond apostles, prophets, teachers and so on. She is beyond archangels and angels. As the hymn says :" more honorable than the cherubim and more glorious beyond compare than the seraphim...".

The question arises why is the mother of God supreme? Because she is the mother of God. Virgin Mary gave birth to Jesus Christ the God. When a woman gives birth to a son the greater her son the greater his mother will be. Jesus Christ is God. In addition, by honoring Virgin Mary we honor her Son. Furthermore, Jesus is sinless because He is God. Sinless means to keep all the commandments of God. Jesus keeps all the commandments of God. One of the ten commandments is to honor your father and mother, 5th commandment. Thus, Jesus honored His parents. He honored His Father by bringing His Father glory by finishing the work His Father gave Him to do (John 17:4). Jesus also honored His mother by making her maximum. God is first, mother of God is second.

The mother of God performs many miracles, Orthodox monks are witnesses.

A prayer is good and effective by its result. If God answers a prayer, then that prayer is good. All monks worship and venerate the Mother of God. Why? Because when they ask something from Virgin Mary it is granted. When we pray to Virgin Mary the Mother of God asks Her Son and because Virgin Mary is His mother He answers yes. The Mother of God is merciful and as a woman she grieves and sympathizes with humans. There are accounts that Virgin Mary is more compassionate and not so strict as Her Son, Jesus Christ. Virgin Mary grieves and insists on Her Son until He accepts:
John 2:1-5: "On the third day a wedding took place at Cana in Galilee. Jesus’ mother was there, and Jesus and his disciples had also been invited to the wedding. When the wine was gone, Jesus’ mother said to him, “They have no more wine.” “Woman, why do you involve me?” Jesus replied. “My hour has not yet come.”
His mother said to the servants, “Do whatever he tells you.”
Jesus performed the miracle turning water to wine. Those who call Virgin Mary by only Her name are not considered Christians. 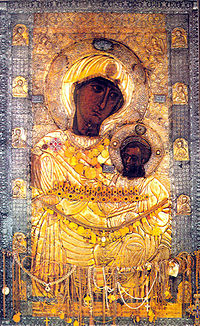 According to the Orthodox Church's Sacred Tradition, the above icon was at one time in the possession of a widow in Nicea. Not wanting the icon to be seized and destroyed by the iconoclasts(destroyers of images used in religious worship), she spent all night in prayer and then cast the icon into the Mediterranean Sea. The widow's son later went to Mount Athos, where he became a monk and recounted the miracle of the bleeding wound, and how the icon had been placed in the sea. Much later, (ca. 1004) the icon was recovered from the sea by a Georgian monk named Gabriel (later canonized a saint in the Orthodox Church), who was laboring at the Iveron Monastery on Mount Athos. This occurred on Tuesday of Bright Week (Easter Week), and is commemorated annually on that day (as well as the fixed date of March 31). The icon was taken to the katholikon (main church) of the monastery from which the icon gets its name.

The tradition goes on to say that the following day, when the monks entered the church they could not find the icon. After searching they discovered the icon hanging on the gates of the monastery. This occurrence was repeated several times, until St. Gabriel reported that he had seen a vision of the Theotokos(Mother of God), wherein she revealed that she did not want her icon to be guarded by the monks, but rather she intended to be their Protectress. After this, the icon was permanently installed above the monastery gates, where it remains to this day. Because of this, the icon came to be called Portaitissa or "Gate-Keeper". This title was not new for the Virgin Mary, but comes from a verse of the Akathist to the Mother of God: "Rejoice, O Blessed Gate-Keeper who opens the gates of Paradise to the righteous." Orthodox monks and nuns throughout the world will often place an icon of the Theotokos Iverskaya on the monastery gates. It is also common in Orthodox temples (church buildings) to place an icon of the Theotokos Portaitissa on the inside of the iconostasis(a stand with icons), above the Holy Doors, looking towards the Holy Table (altar table).

"In 1982, a Chilean convert to Orthodoxy, Jose Munoz, in the company of two friends, embarked from Canada to the ancient bastion of Orthodox monasticism, Mt. Athos, on a pilgrimage. An art teacher by profession, he is also an iconographer, and therefore wished to visit some of the sketes (small monastic communities dependent upon one of the 20 major monasteries of Athos) and monasteries which specialize in icon painting. One of the friends who had accompanied Jose decided to become a monk and remained on Mt. Athos in one of the smaller sketes; Jose and his other companion directed themselves towards the Danilov skete, where icons are painted in the ancient Byzantine style using the egg tempera technique.

After eight hours of climbing uphill on rough terrain, they were very tired and decided to stop at a skete which they could see on the Mountainside below. This skete, dedicated to the Nativity of Christ, is very poor and its 14 monks keep a strict monastic rule. The abbot, Fr. Klimentos, greeted them warmly and offered traditional Athonite hospitality. Then he took them to see the skete's icon-painting studio.

As soon as he entered the studio, Jose felt an immediate and indescribable attraction to a copy of the Iveron Icon of the Mother of God which hung on one of the walls. As he later explained, his heart felt as though it had 'leaped or turned over. " He asked whether he could buy this Icon, but was told repeatedly that it was one of the first icons which had been painted at this skete ( by one Fr. Chrysostomos in 1981) and was not for sale at any price.

That night at a divine service in the church of the skete, during the singing of the angelic hymn to the Theotokos "It is Meet" (one of the chief prayers of the Orthodox Church to the Mother of God), Jose fell to his knees and begged the Mother of God to make it possible for him to take the Icon back with him into the world, where "we have need of You." Immediately he felt an assurance that somehow his prayer would be answered. The next morning, as Jose and his friend were about to depart, the abbot appeared holding the Icon and said to Jose that it pleased the Mother of God for Her Icon to go with him to North America.

Jose and his companion went down the mountain and took the boat towards Daphne, a port on the western shore of the peninsula. On the way, Jose heard a strong inner voice which bade him: "Go to the Iveron monastery and touch your Icon to the original wonder-working Iveron Icon." This they did.

Upon arrival at the Iveron monastery they waited three hours before a monk came to open the church which houses the original "Portaitissa." Jose asked that the protective icon case be opened so that his Icon could be placed upon the original Portaitissa in order to be directly blessed by the Mother of God. The monk was surprised, but agreed to Jose's request when it was explained to him that Jose and his companion wished to take the blessing of the Mother of God to the West where Her intercession is much needed.

Returning to his home in Montreal, Canada, Jose placed the Iveron Mother of God in his icon corner, where he also kept relics of the saints from the Kiev Caves monastery and of the Grand Duchess Elizabeth (one of the New Martyrs of Russia).

Jose began to read a daily Akathist (hymns of praise) before his newly-acquired Icon. At about 4 a.m. on Nov. 24, 1982 (three weeks after his return from Mt. Athos), Jose woke up to the smell of a very strong fragrance, as though someone had spilled a bottle of exquisite perfume. He thought at first that the fragrance emanated from the relics but later, when he stood before the Icon to say his morning prayers, he saw that the hands of the Mother of God were streaked with oil. Jose assumed that a friend who was sharing the house had spilled some oil onto the Icon while adjusting the flame of the vigil lamp hanging before it, but the friend denied touching the lamp. When Jose wiped the Icon, he discovered that it was the source of the wonderful fragrance which had by now filled the whole house.

Upon the advice of a local Orthodox clergyman, the Icon was taken to church and placed on the altar. During the entire liturgy, myrrh flowed from the hands of the Christ Child. Since that time, with the exception of several days during Holy Week, when the Icon is absolutely dry, the myrrh has continued to flow almost uninterruptedly. (Holy Myrrh is a sweet, fragrant oil which was used in the Old Testament for the anointing of kings. In contemporary Orthodox church practice, a newly born Christian is anointed with Holy Myrrh during which the words "The seal of the gift of the Holy Spirit" are said by the priest.)

In the years since, Jose has traveled to many cities and parishes where the Icon has been venerated to the great joy and consolation of the faithful.

Wherever the Icon goes, there are always many questions. Some people initially have doubts. A scientist in Miami was astounded to see that the back of the Icon remained perfectly dry. He later surreptitiously chipped off a small piece of the board on which the Icon is painted for scientific analysis: it was found to be ordinary pine wood, nothing more.

At some times the myrrh flows in greater abundance than at others. During the consecration of a bishop in Montreal there was such an outpouring of the myrrh, that it streamed down from the analogion (lectern on which icons are kept in Orthodox churches) onto the floor. On another occasion, in Florida, the myrrh was seen to rise forth from the hands of the Mother of God and the Christ Child as though it were being pressed from within. Nobody has any power to regulate the flow of the myrrh, it moves to the will of God and His Most Pure Mother."