The resurrection of Christ 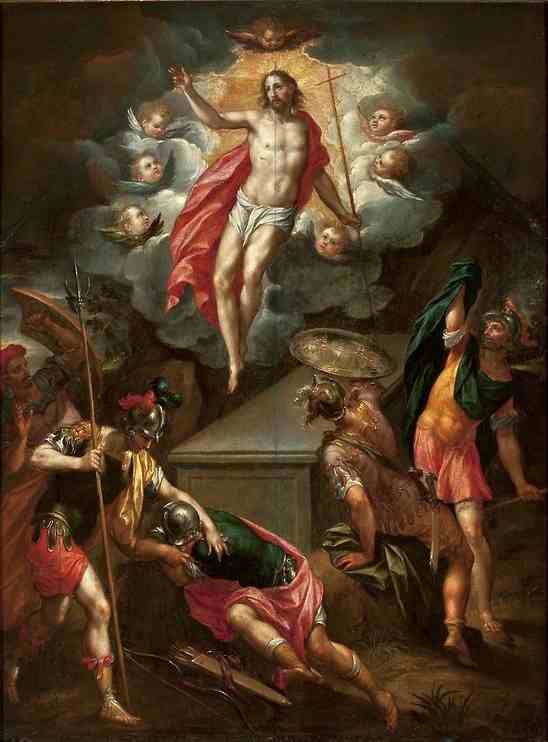 Jesus despite the fact that He died and His body was sealed with a stone in the tomb, He resurrected, rolled away the stone and met the ladies who came to look after His body. The primary reason for His resurrection was to win death and to show us that one day we will follow His example, we will resurrect. Jesus when He resurrected opened the gates to paradise.

On the first day of their week, Sunday, very early in the morning, while it was still dark, Mary Magdalene, Mary the mother of James and Salome came to the tomb bringing spices which they had prepared to rub the body of Christ.

There was a great earthquake. The guards shook for fear of Him and became like dead men.

They found the stone rolled away from the tomb. Then, they went in and did not find the body of the Lord Jesus.

They were greatly perplexed about what happened.

Two men stood by them in shining garments. These two angels bowed their faces to the earth and said: "Why do you seek the living among the dead? He is not here, but is risen! Remember how He spoke to you when He was still in Galilee, saying 'The Son of Man must be delivered into the hands of sinful men, and be crucified, and the third day rise again.'" And they remembered His words.

And as they went to tell His disciples, behold, Jesus met them, saying, "Rejoice!" So they came and Held Him by the feet and worshiped Him. Then Jesus said to them, "Do not be afraid. Go and tell My brethren to go to Galilee, and they will see Me."

Then they told all these things to the eleven and to all the rest.

Why Jesus died? There are many arguments: He took the punishment of our sins, He cleansed us from our sins, He humbled Himself, priests delivered Him to the cross because they feared Him, Roman commanders and soldiers crucified Him because they considered Him a potential rebel leader, Jesus obeyed and pleased His Father.

I think most importantly, Jesus, God, wanted to beat death. He wanted to win, nullify, abolish death. The only way to accomplish this was to die. Jesus could not resurrect unless He died. By resurrecting He won death. Jesus was crucified to resurrect. He showed us that for a human (Jesus is God and human) resurrection is possible and one day all dead will resurrect. Both just and sinners. If you read this know that one day you will resurrect even if the resurrection of the dead happens now, your body will be transformed, it will become incorruptible. The old people will become younger, children will grow naturally until a certain age and then they will stop becoming older. I think this age is 33 years old, the age Jesus Christ resurrected from the dead. One day everybody will be 33 years old, physically, for ever 1 Corinthians 15:50-58.

At the resurrection of the dead (second coming of Christ) the just people will inherit the kingdom of God, the sinners will be cast into everlasting fire. Christ will reign with iron fist. He will have complete authority, He will say something and it will be done. With one word He will cast out somebody into fire. He will be the ultimate Sovereign on earth, the King of Kings. People will live for ever. When people suffer an injury Jesus Christ will heal them. He will give food, clothes, goods to the people Matthew 14:16-21, Matthew 6:25-34. Two thousand years ago Jesus Christ showed us the way.

In conclusion, Jesus triumphed, He won death and met His disciples. He gave us an example of what we will, one day, do: rise from the dead and have as our Sovereign ruler Jesus Christ. At the second coming of Christ, Christ will look after us, tend us, guide us, He will be our King and He will reign for ever Luke 1:32-33.

Second coming of Christ
Resurrection of the dead