One time there was a monk on Mount Athos (Holy Mountain) who begged God to go to paradise while he was still in life. After years of petitions and requests God granted the monk's wish. He went to paradise without dying. Few hours later, when he returned with great amazement he discovered that his fellow monks had died years ago and he met other monks. In his monastery he told the monks he encountered what had happened and they realized that time in paradise (Heaven) passes differently than on earth. For example a day in paradise is equivalent to 1000 years on earth. Is the above a fairy tale? I do not think so. In Psalm 90:4 it says: "A thousand years in your sight are like a day that has just gone by, or like a watch in the night." In 2 Peter 3:8: "But do not forget this one thing, dear friends: With the Lord a day is like a thousand years, and a thousand years are like a day." God is beyond time. He is out of time. He is not restricted by time.

Now, we reach God the time when we are with God slowed to zero, 0. Here when people on earth look at God they see Him immovable and they see the clock with God immovable. The needles of the clock are still. From where God is we look at the earth and He sees the clock moving and people moving with infinite speed. Where God is the time is 0 relative to earth. If we are with God at this point (time is zero) and we look at the earth the earth will be 1/0 faster than the time where we are with God 1/0=∞ (∞=infinite) faster. Infinite times faster. At the time 0, where God is He has seen the universe history from 0 to ∞, God has seen it all: people and clocks moving with infinite speed covering millions, billions, infinite years. God has seen all history from 0 to ∞. God knows the future. He has seen it. He knows it all. That is if He is at point where time is zero relative to earth. Where time stopped.

God is beyond time: 2 Peter 3:8: "But do not forget this one thing, dear friends: With the Lord a day is like a thousand years, and a thousand years are like a day." God can move where He pleases. He can move to zero time He can move to infinite time. If He moves to infinite time we will be immovable like statues our clocks will be seen by God as stationary, immovable. He can come and move with infinite speed to us like an incredibly fast fly. God does whatever He likes. He is beyond time, beyond dimensions. In fact He holds time in His hands from the beginning to infinity like holding a glass bottle and He is above the bottle the following diagram illustrates it. This diagram is metaphorical(not exact). 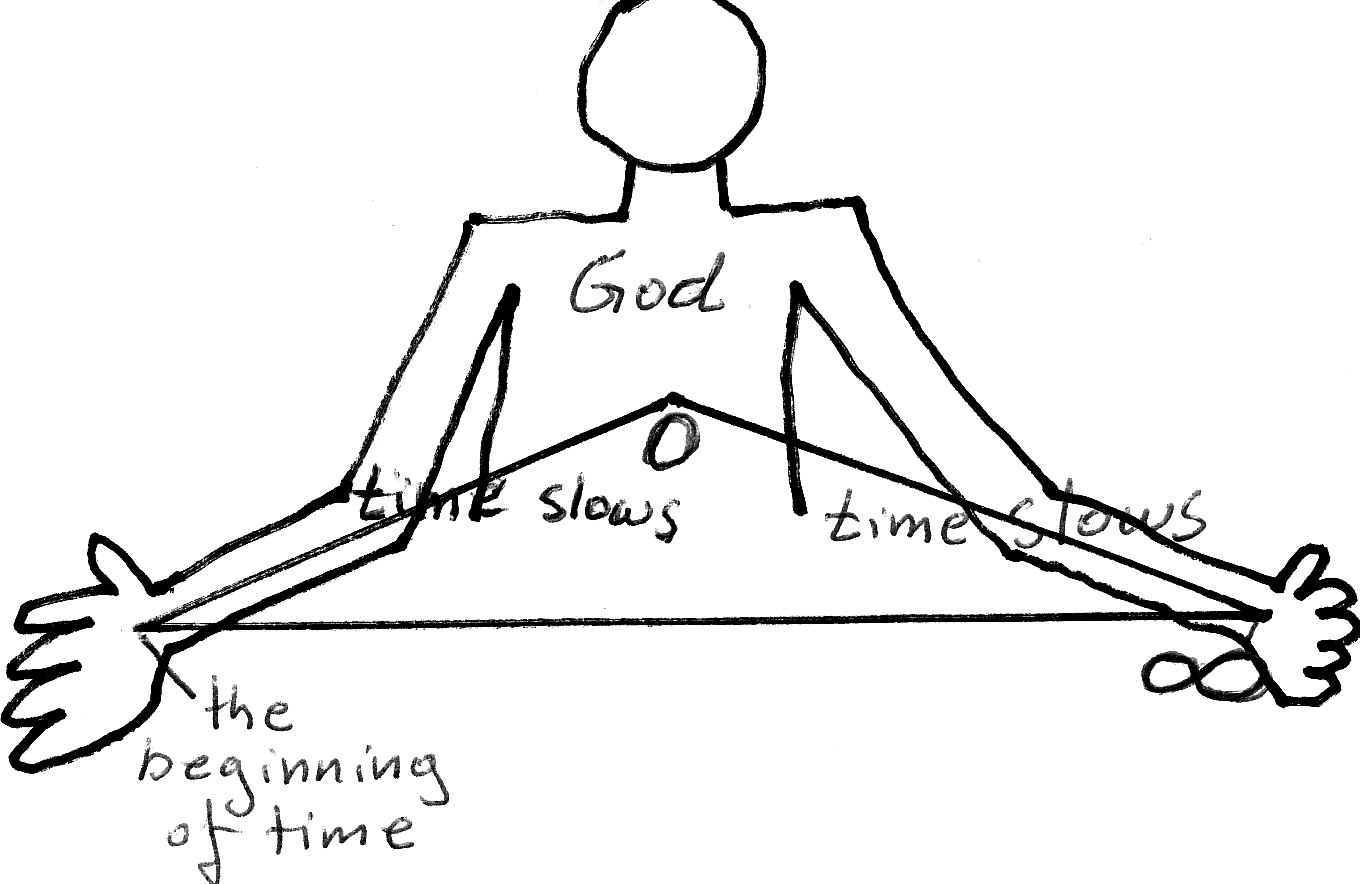 As you move upwards the triangle God uses less and less time(the distance between the two up sides of the triangle) to cover the entire universe's history from the beginning to infinity until He uses time=0.

From God's perspective God knows it all. He has seen it. He knows the future, from the beginning of time to infinity.

There is the following verse: Jeremiah 32:35: "They built high places for Baal in the Valley of Ben Hinnom to sacrifice their sons and daughters to Molek, though I never commanded -nor did it enter my mind- that they should do such a detestable thing and so make Judah sin." Here it says it did not enter my mind. How can He know the future? Please bear in mind that God is kind: Mark 10:18: "“Why do you call me good?” Jesus answered. “No one is good—except God alone”." God does not have pervert thoughts like we do. I think this is what it means: "nor did it enter my mind" they did unspeakable things. I think God knows the future yet He is not sinning in His mind. Here God speaks metaphorically(not exactly).

We are trapped in time. From our point of view as we are in time we will say God will see the future.
It is important to note that at time 0 the past, the present and the future are at the same point: 0 time. They coincide. There is no past or future it is the same one point, point 0. For example in 1 second you see 1000 thousand years in another second you see another thousand years in time 0 you see it all, instantaneously, not even in a second. For God the past, the present and the future are the same. What that means is that God can intervene in human history changing whatever He likes. That is what He does. Ever changing going back and forth so the future is directed by God. He does it His way. Of course, this is the topic of another article I would like to write: The will of God. Please, pray that it is God-breathed.
As previously explained for God the past, the present and the future coincide. There is no past or future for God everything is at present. This is why God can change every event. God is omnipresent(being everywhere at the same time) and omniscient(all-knowing) with His infinite intelligence He changes all events. We can change the present so can God.

How we see events: 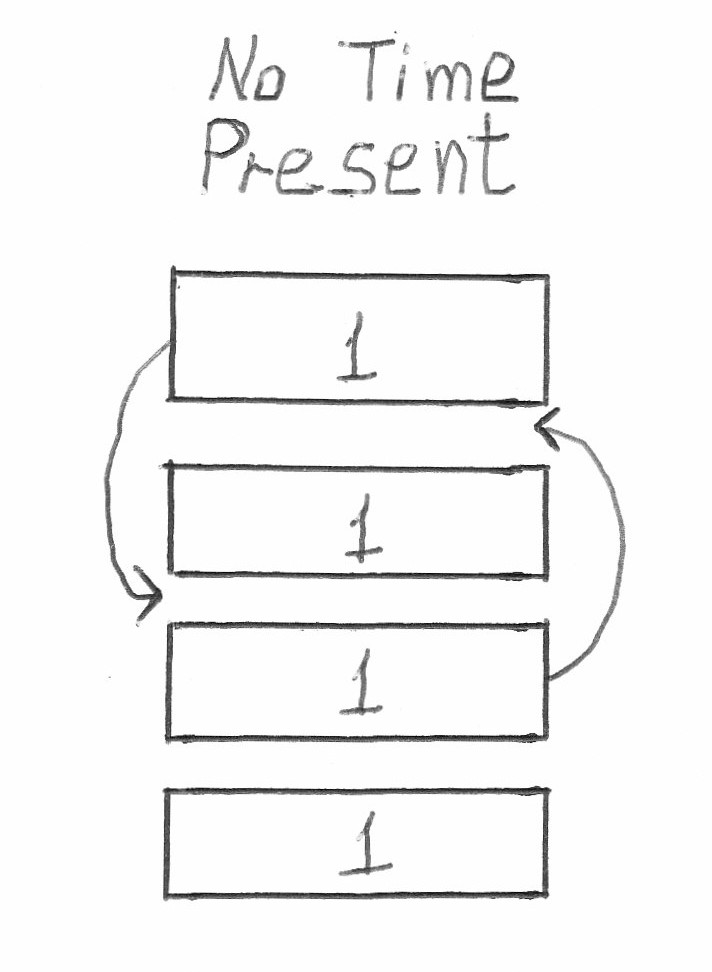 Einstein proved that as time slows mass increases and space contracts. This happens to an object when the object travels fast. As an object approaches the speed of light, its mass rises exponentially also time slows. At the speed of light its mass becomes infinite and time=0. Einstein's equations show that an object at the speed of light would have both infinite mass and a length of 0.
Let us look at our example, from the above, at time =0 the mass becomes infinite. At time=0 there is no space (Einstein: space contracts to 0). When there is no space-time the mass=∞. When time=0, space-dimensions=0, mass=∞. How can mass=∞ and there is no space? It is no mass; it is pure infinite energy. Pure infinite energy is one of the attributes of God. Where time=o there is God who is pure infinite energy. Beyond the universe, which is always expanding, space-time =0, energy=∞ it is God. God contains the universe. The following diagram illustrates it: What I am trying to say is that God sees simultaneously your birth and death. Thus, changing whatever He wants. When God sees something about your death He can change the events of your birth. God thinks, sees, perceives, watches, knows, changes all the past, present and future at the same time. What the above article attempts to explain is that for God all the past, the present and the future coincide.

Romans 8:28-30: "And we know that in all things God works for the good of those who love him, who have been called according to his purpose. For those God foreknew he also predestined to be conformed to the image of his Son, that he might be the firstborn among many brothers and sisters. And those he predestined, he also called; those he called, he also justified; those he justified, he also glorified."
1 Corinthians 2:7: "No, we declare God’s wisdom, a mystery that has been hidden and that God destined for our glory before time began."
Ephesians 1:4-5: "For he chose us in him before the creation of the world to be holy and blameless in his sight. In love he predestined us for adoption to sonship through Jesus Christ, in accordance with his pleasure and will"
Ephesians 1:9-12: "he made known to us the mystery of his will according to his good pleasure, which he purposed in Christ, to be put into effect when the times reach their fulfillment—to bring unity to all things in heaven and on earth under Christ. In him we were also chosen, having been predestined according to the plan of him who works out everything in conformity with the purpose of his will, in order that we, who were the first to put our hope in Christ, might be for the praise of his glory."
Psalms 139:16-17: "Your eyes saw my unformed body; all the days ordained for me were written in your book before one of them came to be. How precious to me are your thoughts, God! How vast is the sum of them!"
Psalms 139:16-17 (NLT): "You saw me before I was born. Every day of my life was recorded in your book. Every moment was laid out before a single day had passed. How precious are your thoughts about me, O God. They cannot be numbered!"

I wrote above God sees your death and birth changing whatever He wants. God sees in His infinite mind, He thinks. He thinks all the different possibilities, combinations which are infinite. For example, He sees in His mind a scar when you were born and thus a scar when you die. He sees, for example, that you pray hard before you die to protect you He rules out the scar which supposedly was inflicted when you were born. The possibilities are infinite, please, see above: "cannot be numbered." Then He lays all the events to happen, a line: the entire history.
God first thought and then unfolded history, all of history. That is why the Prophet and King David in the above Psalm 139 immediately after saying "every moment was laid out before a single day had passed" he talks about God's thoughts and that "they cannot be numbered".
In His mind God thought and chose all events defining one line of history. All of history is predestined by God.
The question which arises is that if all of history is predestined by God how can we have free will which God takes into account?
Please, bear in mind that all of the above God have done them in time 0 the thoughts of God and all the events coincide at time 0. We cannot think at time 0. We need at least a split of a second to think. If we have not some time we cannot think the same applies with action. Not for the infinitely capable God. God first thought then chose and then made history simultaneously. The just above coincide at time 0. At time 0 God took into account our feelings, thoughts and actions, our will.
So tell us what is this line of events, what will happen in the end?
Jesus Christ Wins

Christianity does not believe in destiny: your future is in your hands: work, fight, pray, repent to change your future:
Luke 18:1-8: "Then Jesus told his disciples a parable to show them that they should always pray and not give up. He said: “In a certain town there was a judge who neither feared God nor cared what people thought. And there was a widow in that town who kept coming to him with the plea, ‘Grant me justice against my adversary.’
“For some time he refused. But finally he said to himself, ‘Even though I don’t fear God or care what people think, yet because this widow keeps bothering me, I will see that she gets justice, so that she won’t eventually come and attack me!’”
And the Lord said, “Listen to what the unjust judge says. And will not God bring about justice for his chosen ones, who cry out to him day and night? Will he keep putting them off? I tell you, he will see that they get justice, and quickly. However, when the Son of Man comes, will he find faith on the earth?”"